The Power of We: Cut costs by sharing a distribution infrastructure.

KANE has built a nationwide warehousing network that consumer product companies can share. By co-locating your inventory with similar products, even competitors’ products, you can share, thereby reduce, your facility overhead costs. KANE does not offer month-to-month public warehousing agreements. Engagements involving KANE's multi-client facilities are with companies seeking a longer-term strategic relationship whose volumes, nationally or within a region, do not require a dedicated facility.

KANE people treat the AGFA business as if it were their own.

The KANE-operated facility in Southern California allows Carrier to have a distribution center close to its vital West Coast customers and has supported a strong, steady growth of product sales in this market.

At the heart of a truly effective logistics collaboration are two teams working together toward a common goal. To exemplify such positive collaboration, Inbound Logistics recently highlighted the partnership between KANE and AGFA Graphics, a Belgium-based supplier to the printing industry.  One of KANE’s distribution centers in Scranton, PA serves as AGFA’s national DC. KANE receives and processes orders in real time and ships them ––using full truckload, LTL, courier and parcel – to other AGFA locations and customers, both regionally and nationally.

“KANE people treat the AGFA business as if it were their own,” says Jonathan Ashton, AGFA’s VP of Operations in North America.

Based on the success of the partnership, KANE has established AGFA distribution points at several of KANE’s other nationwide locations.

KANE operates 6 million square feet of warehousing distribution space, with facilities spanning every region of the U.S, including both shared warehousing facilities and facilities dedicated to a specific customer. 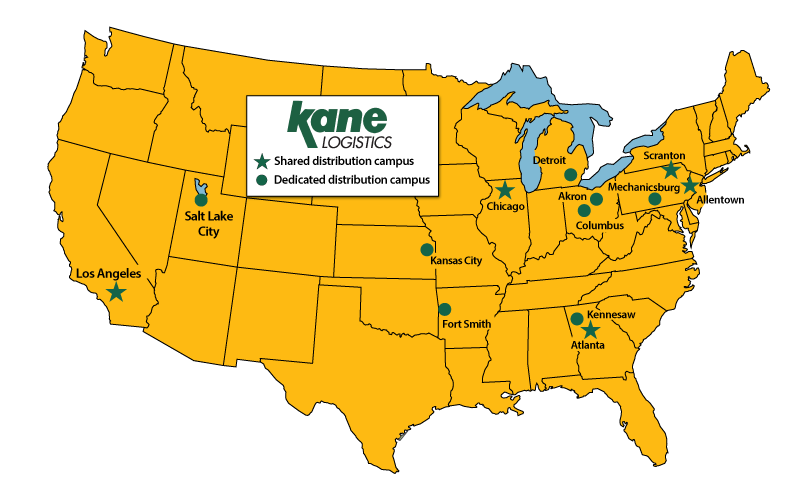