Kane Logistics was named 3PL Partner of the Year for 2020 by Sam’s Club. The award recognizes operational excellence and overall dedication to customer service. KANE operates three of the retailer’s 17 U.S. distribution centers and outperformed 4 other 3PLs to earn this honor.

“2020 was really the year of KANE,” stated Derek Jemeyson, Sam’s Club’s Senior Director of Operations. “Despite the pandemic and the fact that distribution volume was up 32% over the previous year, KANE facilities increased productivity by 10% and outperformed all other 3PL partners on our 10 key operational metrics.” 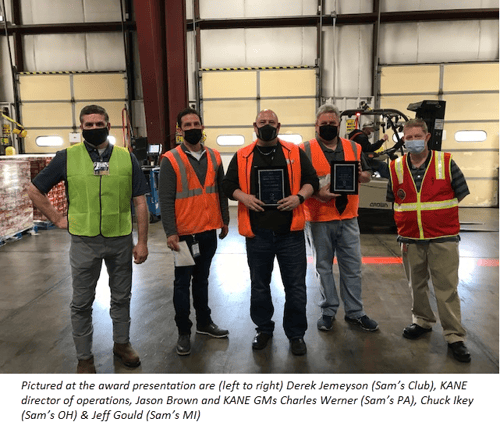 Kane Logistics is a past winner of Walmart’s Carrier of the Year award and this is the third time KANE has won the Sam’s Club 3PL Partner of the Year Award.

Commenting on the honor, KANE Director of Operations Jason Brown, who oversees the three Sam’s Club DCs that KANE operates, said, “The key to sustaining peak operational performance is getting buy-in from each of the KANE associates who are part of Sam’s extended team. When each person understands the goal and is personally committed to excellence, the team wins and the customer wins.”