On February 11, the Pennsylvania Department of Transportation (PennDOT) announced plans for a commercial vehicle ban on all major highways in Eastern Pennsylvania in anticipation of a predicted snow-ice mix the following day.   Thankfully, the severity of the storm fell short of predictions and roads remained safely drivable for the duration of the weather event.

But by the time DOT administrators caught up with Mother Nature’s exact plans, it was too late for trucking companies to avoid major financial losses related to pulling trucks off the road.

At Kane Is Able, safety is priority number one.  We’ll stack our safety performance against any logistics company nationally. But when it comes to weather-related highway bans, we can’t help but think there is a way to put safety first, while still addressing the practical concerns of commercial carriers and their customers. Specifically, we believe roads would be just as safe, or safer, if we let carriers determine when it is safe to drive during weather events.

The financial reality of a commercial vehicle ban 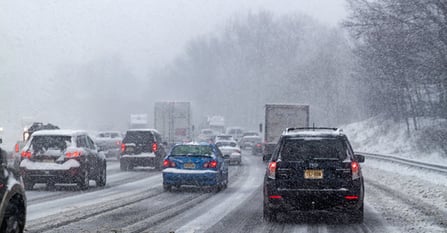 Here are some of the things that trucking companies must do when highways are off limits:

All told, costs related to pulling drivers off the road can be $700–$2,000 per day, per each impacted truck. That’s a hefty price tag for commercial carriers with larger fleets, particularly for a weather event that turns out to be a “non-event.”

Trucking companies have the most to lose from unsafe driving conditions

The cost to a trucking company of pulling drivers off the road is nothing compared to the financial and human cost of road accidents – to the company and others. When roads are unsafe due to snow, ice or wind, it’s simply not in a trucking company’s interest to have its drivers on the roads. That’s why – for decades – industry has done a very good job policing itself during severe weather events and making the right dispatch decisions.  Are state edicts really necessary?

One analogy might be school closures. Each school district makes its own decision to either cancel school or have a delayed opening or early dismissal.  If anything, districts are overly cautious since the safety of children is involved.  They closely monitor weather changes in their specific towns and are typically making school closure decisions at the last possible moment – when all the data is in – around 4 or 5 am.  Rarely, if ever, do states intervene and mandate closures.  There’s simply no need.

Supply chains can be managed to an incredible degree of precision. Items can ship over 3,000 miles for delivery within a several-hour time window. Commercial vehicle bans can be managed with similar precision, and can be done by carriers themselves who have access to minute-by-minute weather updates.

For storms that track south to north or west to east, it makes sense that truck travel corresponds with the changing weather in specific regions and on specific roads. When the state manages the process, precision is often lost. Bans are applied and lifted with blanket decrees that impact multiple roadways in different regions of the state at the same time.  In trucking, minutes and hours matter a great deal. The ability to put trucks back on snow-free roads 45 minutes earlier could mean delivering that day or having to reschedule all of today’s, and tomorrow’s, deliveries.

The other somewhat confusing aspect of the recent vehicle ban in Pennsylvania was that it applied to commercial vehicles only. So, a citizen could travel via highway to the local supermarket to pick up milk and bread, but the trucks that actually deliver the milk and bread to stock the shelves can’t.

States can be both safe AND logistics-friendly

Road closure decisions dramatically impact the flow of commerce through a state. We need to make sure those decisions are about physical safety and not about what is politically safe.

The best way to do that is to leave the decision to the carriers themselves. It is the carriers who are most motivated, out of self-interest, to ensure trucks are put on the road ONLY when it is safe to do so.

Pennsylvania has a well-deserved reputation as the best and most economical distribution hub for goods moving to consumers throughout the Northeast.  With the public and private sector working together on issues like commercial vehicle bans, we can make sure we sustain that reputation for safe, well-maintained, well-run roadways.