Be kind. Be careful. Be yourself.

The other day, we received a message on KANE’s Facebook page. It was from someone who had been driving his car behind a KANE truck for several miles and was commenting on the words on the back of every KANE trailer: “Be kind. Be careful. Be yourself.”

His comment: “The last few months have been heavy for me. Somehow, reading those words over and over made me feel calmer.” 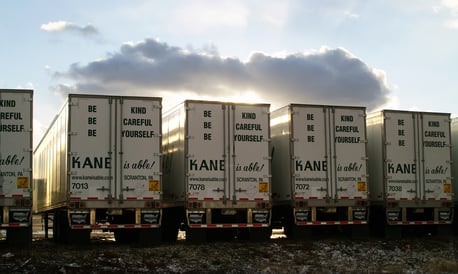 We get similar comments about the trailer message about once a month. The message is part of the legacy of KANE family patriarch, Gene Kane, who was president and CEO of Kane Is Able/Kane Logistics from 1955 to 2001. For carriers, the back of trailers is prime real estate for messages about trucking services and driver recruitment. Gene saw the space as an opportunity to send a message to fellow drivers – busy people rushing to get somewhere, and possibly a little stressed – about what’s really important.

Over the years, KANE has resisted the temptation to replace the words with a promotional message. We’ve kept the focus on others, not KANE. Here’s a quick review of Gene’s intent when he added the phrase to all KANE trailers in 1970.

Be kind. No hidden meaning here. Think about others. Spread kindness whenever and wherever you can. Gene built a successful business on kindness. One of Gene’s expressions was, “You can’t give kindness away; it always comes back to you.”

Be careful. Being safe and operating machinery properly was of paramount importance to Gene. That legacy continues at Kane Logistics to this day. This was meant to prompt drivers to be aware of their surroundings while driving on the highway, where even a short lapse in focus can lead to disaster. It was also a reminder to, in Gene’s words, “Be full of care, in your relationships with others, and also in the decisions that you make.”

Be yourself. It’s a straightforward reminder to listen to your own voice and forge your own path, versus being a follower. It’s a bit of an existential message – particularly for a company that traces its roots to 1930 – but certainly prescient in light of society’s current focus on inclusion. Once again in Gene’s own words: “Among the 7 billion people alive today and the billions more who have lived before us, you were created to be a unique individual with some specific part to play in God’s plan for the world.”

My son (Gene Kane’s grandson) is a senior in high school and recently wrote a college entrance application essay. For his topic, he avoided the pandemic, politics, climate change or any of today’s headline-hogging subjects. His central theme was the need in the world for more kindness.