Lip Service.  According to Merriam-Webster, it’s a belief “expressed in words but not backed by deeds.”

There’s a lot of that going on when it comes to programs for continuous improvement in logistics. Some companies do quite a good job presenting the image of a quality-driven operation. But too often the banners, slogans and award certificates – the eye candy – don’t translate into real cultural change.

Excellence in our space is doing a great job and then coming in the next day having the motivation to do it just a little bit better. It’s not always glamorous, but it’s necessary.

That’s why it’s so critical to get it right. And to call attention to it when we get it wrong. 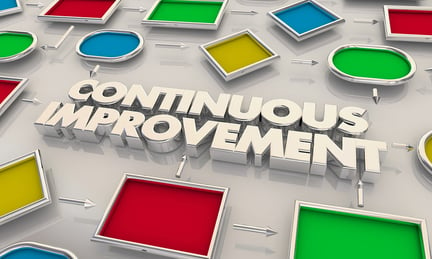 Lean programs that aren’t very lean. That’s right, the management approach that seeks to eliminate waste can, if we’re not careful, become weighed down with bureaucracy – meetings, paperwork, reporting and budgets. We wrote an entire eBook about the problem. Yes, efforts around continuous improvement in logistics do require some structure, but the tools, forms and processes amount to nothing if you don’t change the way people think.

The lack of an unwavering, long-term commitment. Executives who seek the efficiency-driving benefits of continuous improvement too often look toward “lean-in-a-box” solutions – and there’s no shortage of consultants selling such programs. But instilling a culture of continuous improvement is not like installing whole-house air conditioning. You can’t simply write a check and enjoy the results. It requires a year-after-year commitment of time, energy and money until every associate understands that the commitment, and the expectation, is real.

Too much focus on soliciting ideas, rather than problems. Here’s an example. Let’s say office workers need pens clipped to their breast pockets to be most efficient, but those pens leak and often ruin their work shirts. The idea-oriented quality program wants these workers, before they even surface the problem, to come up with the idea for the pocket protector or the never-leak pen. Why are we asking associates to be inventors? We want them, first and foremost, to be observers who can recognize waste and inefficiency and aren’t afraid to say “Let’s fix it.” It’s the problems that should be the trigger for continuous improvement, not the solutions.

At KANE, we haven’t completely cracked the code on instilling a continuous improvement mindset in every facet of the business (if we had, we’d have nothing to improve upon!), but we’re making progress. One recent example illustrates some of the key success factors for a continuous improvement initiative. For a large liquor distribution operation, we reduced over, short and damaged (OS&D) product as a percent of total inventory by 68%.

The following elements of this logistics continuous improvement initiative helped to drive success:

Bottom line: we committed to a bold improvement objective and did not shy away from spending money and making pretty material changes to the business (e.g., incentive system) to make it happen.

And we did it all without banners, slogans and t-shirts.

All action; no lip service.